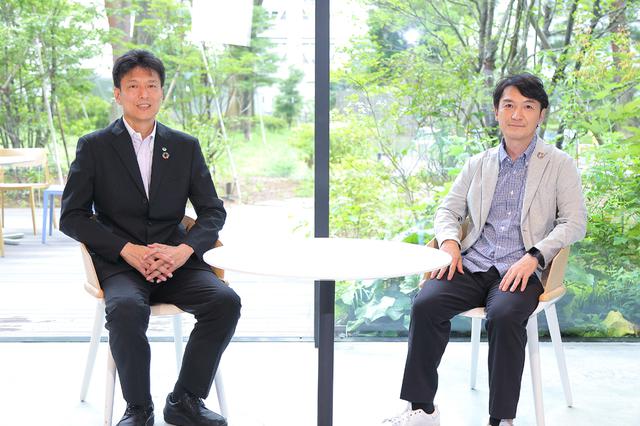 Prologue — What is "Kyōsō-no-Mori?"
[Second half] Exploring the possibility of innovation amidst the coronavirus pandemic

Executive Foresight Online 編集部 @ Executive Foresight Online
From Kyōsō-no-MoriPrologue — What is "Kyōsō-no-Mori?"Open InnovationHitachi
This two-part feature focuses on two key figures from Hitachi Research & Development (R&D) Group: Masakatsu Mori and Yukinobu Maruyama, who will be discussing the purpose of "Kyōsō-no-Mori," Hitachi's R&D hub that was launched in April 2019 in Kokubunji, a city located on the western outskirts of Tokyo. In this second half, Mori and Maruyama talk about topics such as their innovation initiatives that play against the ongoing coronavirus pandemic, ingenuity within the company for innovation creation, and the ideal form of community creation with customers according to "Kyōsō-no-Mori."
FacebookTwitter 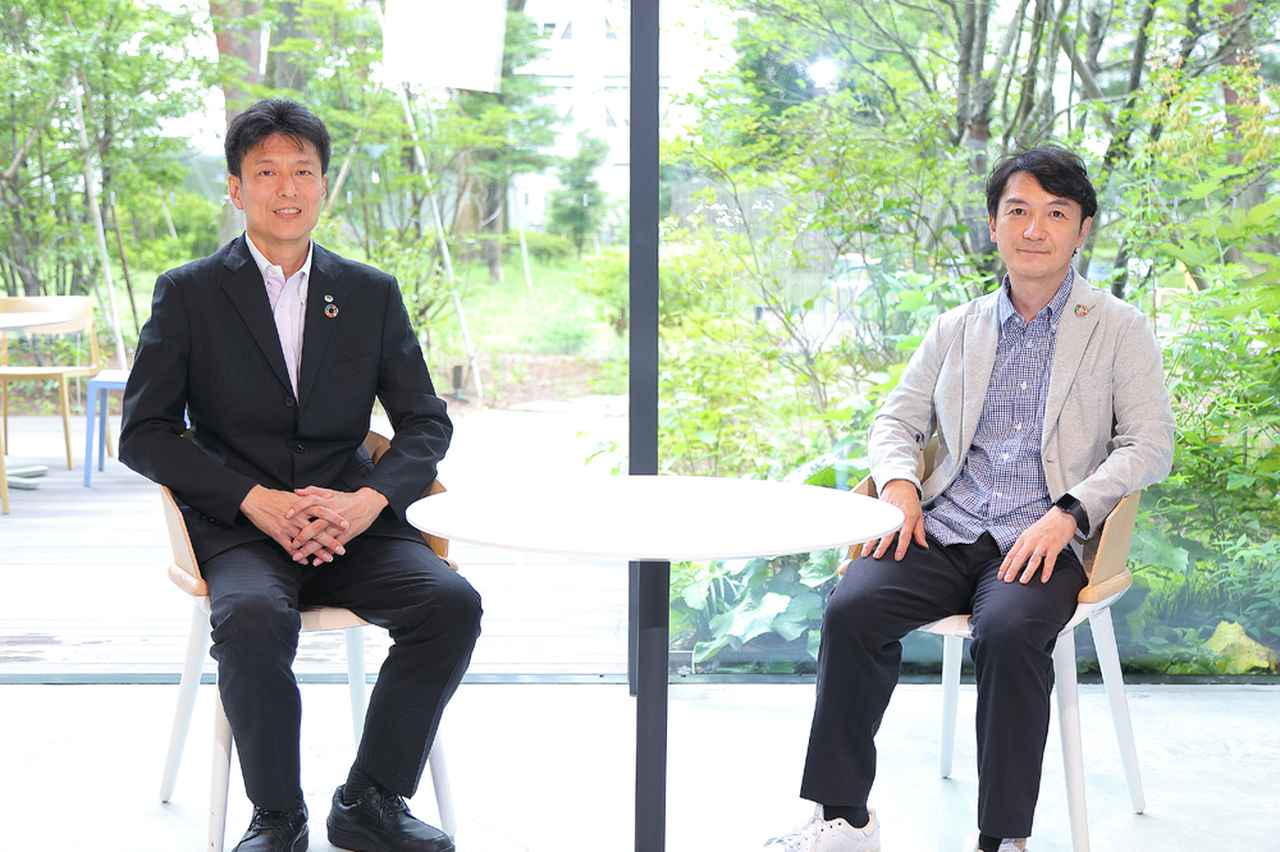 Click here for '[First half] Why did Hitachi launch "Kyōsō-no-Mori?"'

Mori
As you mentioned, it has been difficult for people from companies and public administrations to visit "Kyōsō-no-Mori" due to the pandemic. We have also been forced to postpone workshops and conferences. Although the number of visitors decreased compared to 2019, there was a considerable amount of projects that began as well. The process went like this: after holding several workshops remotely, we were able to launch collaborations.

While we feel the effectiveness of remote co-creation, we are faced with questions like "How are we going to make use of 'Kyōsō-no-Mori,' which is our physical communication hub?" and "How can we change the way we co-create?" So, R&D Group decided to stream our webinar titled Innovation Starting with a Question, which took place this June, as a place for us to pose questions and discuss them with people outside Hitachi.

Today, there are so many complex issues that cannot be solved by existing academic fields alone. It is necessary for us to re-examine "questions," which are the essence of research. This is why we chose "Innovation Starting with a Question" as the topic of this webinar. For each "question," people will have different answers. For this reason, we thought that this was a topic worth discussing.

Maruyama
Among such topics, we hope to have thorough discussions about what social issues are in the first place. Because, over these years, we have been focusing on initiatives to make innovations happen by connecting them with research activities. But, on the other hand, we actually feel that the amount of input — the fertilizer for researchers and designers — has decreased. If we can increase the amount of input by "asking questions" to people outside Hitachi through online systems, we may be able to grasp social issues more accurately. These are our current thoughts.

"100 Interviews" — A source of ideas to replace small talk

Maruyama
I am going to slightly drift away from the subject, but I think the amount of what you might call "blank space in conversation," something like small talk after a face-to-face meeting, has decreased significantly due to the fact that we can casually communicate with each other over online systems. This is how I have felt looking at Hitachi for the past year. Without any casual small talk, the dynamics of ideas won't emerge. I strongly feel this.

And so, the R&D Group launched an initiative titled "100 Interviews" targeting Hitachi employees. And we have been broadcasting the interviews over our company radio (in-house only streaming network) for about six months now. It's a good way of introducing new graduate employees or those who have recently been transferred to Hitachi. Also, the first thing you say to a new colleague when you meet them face-to-face will change depending on what you know of their personality and interests. As well, if you have common interests, it can grease the wheels of your new work relationship. I am hoping that these "100 Interviews" will expand as a "trust base" within the R&D Group.

The interviewee is asked about such things as how they spend time online or what their hobbies are, instead of work-related topics. Interestingly, there are some cases when a conversation about a hobby connects with the interviewee's task and research philosophy. For example, an AI researcher whose hobby is shogi (Japanese chess) may share their view about the singularity of AI shogi surpassing human intellect. Or, a designer who has recently been into sento (public baths) may talk about their views on the relationship of the Japanese sento culture and the architecture of the Showa period (1926–1989). This allows employees to see various sides of their co-workers that could lead to inspiration in their work. We are hoping that this initiative will work to stimulate other employees.

The ideal form of community creation according to "Kyōsō-no-Mori"

— Through initiatives such as the webinars that you just talked about and places like "Kyōsō-no-Mori," how are you planning to involve companies and public administrations?

Maruyama
As one of R&D's contributions to society, I would like to create a community with webinars as the pillars that generate knowledge. With "asking questions" as our starting point, we would like to create visions with companies and public administrations, make prototypes of new business models, and turn them into solutions. Instead of keeping those merits just to ourselves, we hope to become something like an innovation pipeline, something that accelerates the realization of our goals through activities at "Kyōsō-no-Mori."

Mori
Like the "25 Future Signs" that I mentioned in the beginning, "Kyōsō-no-Mori" has a unique perspective. People from companies or public administrations who have seen our website often come to us saying "That perspective sounds interesting. Please tell me more about it." If a customer thinks about us when deciding to try and solve a certain issue, we may be able to create a new business model together.

Maruyama
A response that came from a person outside Hitachi when we started our webinar made me smile, which was "So, Hitachi finally started a 'dialogue' with the outside world?" In the end, Hitachi lacks the power needed to solve social issues on its own. The world won't change without discussing, thinking, and creating something new with people from companies and public administrations. In order to do so, we would like to ask for your help.