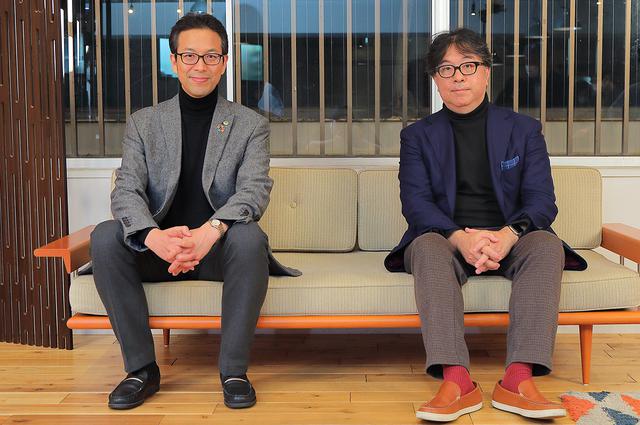 Societal Transition and AI - Vol.3: Social Systems Created by Diverse Data
[Part 2] What is a new data utilization space that should be established between the public and the private area?

Executive Foresight Online 編集部 @ Executive Foresight Online
From Kyōsō-no-MoriSocietal Transition and AI - Vol.3Artificial Intelligence(AI)Big DataOpen InnovationExpert
Research & Development Group, Hitachi webinar " Innovation Starting with a Question — Social Transition and AI," was streamed on November 29, 2021. In this feature, we bring you the dialogue between Mr. Kentaro Fujimoto, the President and CEO of D4DR inc. and Hiromitsu Kato from Research & Development Group, Hitachi. Mr. Fujimoto points out that a "Semi-public Area" is an essential factor in the future data utilization space. For Kato, "S3 Architecture" is effective in building a trustworthy social system. In this part, we looked into the meanings of each concept.
FacebookTwitter

Maruyama
Is it really okay for personal data to be used in social systems? This is a controversial issue. As an approach to tackle this issue, I think a new type of data utilization space that can mediate public and private interests will be necessary. Mr. Fujimoto, what do you think?

Mr. Fujimoto
I've been thinking about a data utilization space that is based on the model of an "engawa" (a strip of flooring that represents a filter between the inside and the outside, a typical element of a traditional Japanese house). When someone is sitting on an engawa, they are wearing shoes and their shoes are on the ground. It's a rather gray situation where you can't clearly tell whether the person is inside or outside the house. Due to this, it can generate "unofficial interactions." If you enter from the front door, it becomes an official visit. So you'll need to welcome the visitor. However, as engawa are semi-public spaces, they can generate casual and relaxed interactions.

My hypothesis is that when you apply this concept to the world of data, you can generate an architecture of communication where you can utilize the data in a more flexible manner, by creating a semi-public space between an area of public data utilization and a private one.

I think this concept is also effective in the promotion of interactions between companies. With a system that resembles an engawa, different companies can share ideas and data in a casual manner, making it easier to generate open innovation.

Maruyama
How can we define an "engawa" from a public point of view?

Mr. Fujimoto
Let's imagine a park in the future. The park is aimed to be used by the local people. What can we do to make it into a safe space for them? For example, we can register all the inhabitants of the community as users in advance. In the park, we can install cameras that recognize them. By doing so, you can feel secure and let small children play there.

Creating a sense of security is the key. We can take measures such as making an alarm go off whenever someone who hasn't registered comes into the park, or set up a gate so only the registered people can enter. But you don't need to go that far, because being able to identify the people in the park will create a sense of security.

I believe we can create a similar digital version of such semi-public spaces.

Maruyama
In other words, various companies come to the "engawa" with their data. And such interactions are visible to the outside world, ensuring secure data utilization. Can there be a real-life example of this in business?

Kato
At Kashiwa-no-ha Smart City in Chiba, a project which Hitachi is involved in, AI cameras (*) are being implemented to ensure the safety and security of the local people. If a suspicious person with a knife is roaming around the city for example, the AI cameras detect and report it.

There is an initiative to utilize this system in not only crime prevention but also business, by visualizing the bustle of the town from the data based on the flow of people. However, with such data comes privacy concerns. Depending on how it is used, it could be abused. In order to prevent this, there is a study going on at the H-UTokyo Lab. (*1) on how to set the utilization policy of the data collected from the city called the "Habitat Innovation Project (*2)."

* 1 A joint-research project between Hitachi, Ltd. and the University of Tokyo, which was launched in 2016 as a collaborative research space to achieve "Society 5.0," a concept proposed by the Japanese government.
* 2 A citizen-led initiative proposed by H-UTokyo Lab. in order to achieve Society 5.0 within familiar issues.

Mr. Fujimoto
In the future park that I previously mentioned, I think you can achieve recognition with higher accuracy by scoring individuals with a so-called "Trust Score" and enhancing the quality of the data. Needless to say, the Trust Score itself is a controversial issue, so there will be need for thorough discussions. Other than the data that can tell whether the person entering the park is "an inhabitant or not," if it could tell whether that person is "an adult or a minor" for example, the level of authentication accuracy will be higher and the sense of security in using the park will be enhanced too.

However, simply detecting a suspicious person in the train from their behavior, this may be possible with today's technology. In addition to this, you can generate a solid sense of security by creating a membership of railway users like the future park. I think such methodology will attract attention going forward.

Maruyama
Mr. Fujimoto prop%%osed a rather bold idea, but as for the construction of a future social system, in other words architecture in the world of IT, in which direction should we be moving towards?

Kato
Hitachi's Social System Research Team proposes a concept called "S3 Architecture." It's a concept of designing social systems from three viewpoints; systems, services, and society. I think there is a similarity between this concept and the story of the engawa which Mr. Fujimoto mentioned.

The first point, "system," is about looking into a physical society or a cyber society called the "Cyber Physical System" from the viewpoint of a system operator. The second, "service," is the view from an innovator who incorporates new technologies into the system. Let's go back to the example of Kashiwa-no-ha Smart City. By installing AI cameras around the city, you can test what kind of problem will occur or what kind of innovation will emerge. It's a form of a sandbox (*). And by setting individual goals for the community that includes inhabitants, you test them in places like an engawa and evaluate them from the viewpoint of a governor. This is the third point, "society."

* A sandbox: Refers to a virtual environment created within a computer.

You set up a social system rule from these three perspectives, and evaluate them based on the data to see if the system is working in accordance with the rule. In the process, you make improvements in the system. This is the type of innovation creation that we are proposing.

Click here for "[Part 3] How should social systems deal with AI and diverse data?"