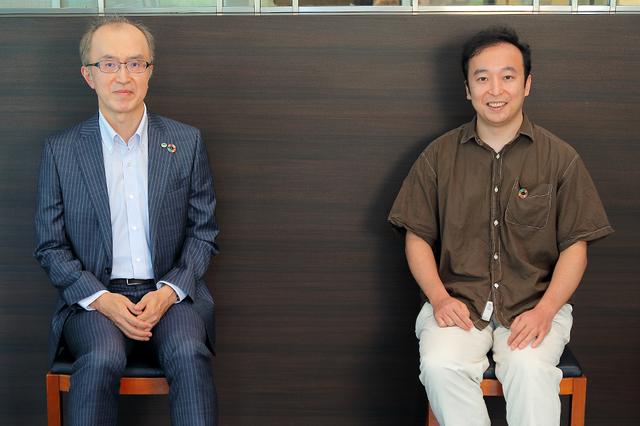 Societal Transition and AI - Vol.1: SF Prototyping as a Way of Thinking About the Future
[Part 3] What will the future relationship between social systems and AI be like?

Executive Foresight Online 編集部 @ Executive Foresight Online
From Kyōsō-no-MoriSocietal Transition and AI - Vol.1Artificial Intelligence(AI)Expert
This is a conversation featuring Dr. Osawa Hirotaka of the University of Tsukuba, known for his research in SF Prototyping, and Itaru Nishizawa, who leads the digital technology research division at Hitachi, Ltd. In the final part of this conversation, Dr. Osawa and Nishizawa discussed the outlook of the relationship between our social systems and AI, along with the role of SF Prototyping as a cohesive way to further understand the future.
FacebookTwitter 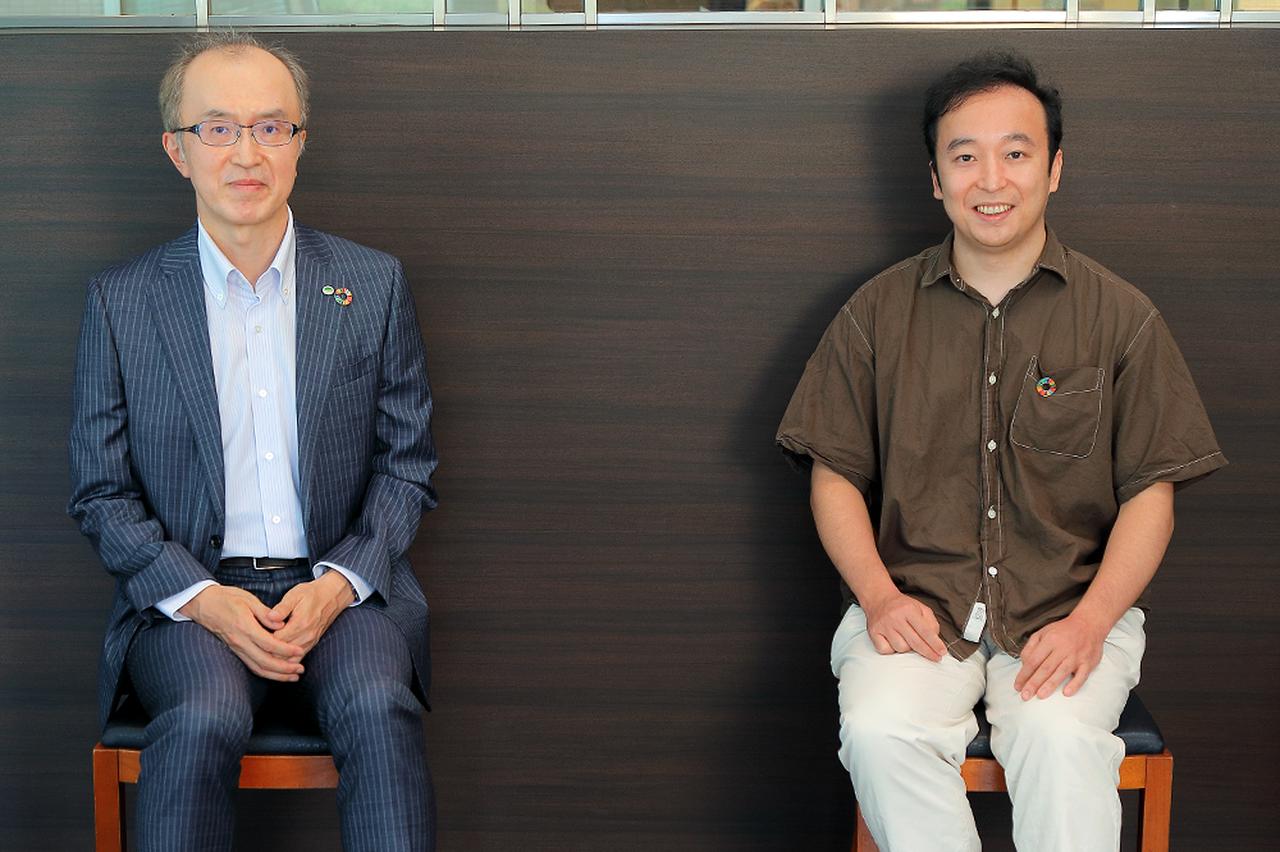 [Part 1] What issues does AI pose for our lives?
[Part 2] How can we connect SF Prototyping with innovation?
[Part 3] What will the future relationship between social systems and AI be like?

Science fiction as the key to connecting people's imagination

Maruyama
The final topic of today's conversation is "what will the relationship between our social systems and AI be like in the future?" As we continue our relationship with AI towards a so-called VUCA(*) future, I believe the concept of SF Prototyping, proposed by Dr. Osawa, has an important role here. What do you think?

* VUCA is an acronym in business for volatility, uncertainty, complexity and ambiguity, and represents the unpredictable conditions of society. It was coined as a military term in the US in the 1990s.

Dr. Osawa
Yes. Indeed, I think the future is something that we create together, rather than predict. It is important to shift towards a mindset from "maybe the future will be like this" to "I want the future to be like this." In doing so, science fiction is a perfect material. Of course, science fiction isn't all about a positive future. It also has bad examples that we can learn from. But if we take this in the form of a metaphor, I think it will give us new ideas.

Once AI penetrates into our social systems, it will be automated in a way that supports human thoughts. In addition, society will almost certainly become unpredictable. When that time comes, we need to think about what we want to do, from the standpoint of community and society. This can be said for companies too — they need to think about utilizing AI within society, not only within the company but also with customers. As a communication tool to make this happen, I regard science fiction as the key to connecting people's imaginations.

I think Japan is a country that is capable of doing so, having many extraordinary pieces of fiction. I hope that people will properly utilize science fiction's ability and use it as material for thought to create a better future.

Nishizawa
During today's conversation, we came upon the word "scenario" several times. And I thought about the Professor at Hitotsubashi Business School, Ken Kusunoki's book, "Competitive Strategy as a Narrative Story." It defines a good strategy as a story that you not only enjoy yourself, but is something that you also can't help but share with others. In order to make a large project happen by involving a range of people, we need an attractive story that can resonate with everyone. When we imagine the future with SF Prototyping, we can move towards a better future if each person brings a creative scenario and shares it with others. This is what came to mind after listening to you just now.

Today, AI is finally being gradually introduced in various ways in the real world. However, as Yuval Noah Harari, a historian from Israel, pointed out in his book "Homo Deus," AI can be an extremely scary thing for humans. Some people worry that it may lead to disaster someday. However, if we remain entrenched with this idea, we will become too wary to innovate with AI. As Dr. Osawa mentioned in the beginning, how can we maintain the fairness of AI? I think this will become increasingly important in the future.

In Kazuo Ishiguro's novel "Klara and the Sun," which I read recently, there is an AI robot that takes care of children in wealthy households. The robot is not only extremely good at human observation, but it also thinks about making the child happy and healthy. I regarded this AI as something with a noble spirit that has surpassed humans. I was encouraged by the fact that this story proposed a future where AI is a good thing. We would like to look into ways of research and development where humans can utilize AI to move towards a better future.

Maruyama
As a way of making a breakthrough, we at Hitachi, Ltd. would like to implement SF Prototyping in our research and development. As Dr. Nishizawa just mentioned, we need to move towards a utopia while keeping a dystopia in mind. We hope to continue with this kind of prototyping. Dr. Osawa and Dr. Nishizawa, thank you very much.

Osawa Hirotaka
Born in 1982. Assistant Professor at the University of Tsukuba, Faculty of Engineering, Information and Systems.

Principal investigator of the Human-Agent Interaction Laboratory. Board member of the Science Fiction and Fantasy Writers Club of Japan. Doctor of Engineering (Keio University). Osawa Hirotaka specializes in human-agent interaction and social intelligence. He is the leader of the "Human Information Technology Ecosystem" program "Updating Imagination: The Design of Fiction by Artificial Intelligence" at the Research Institute of Science and Technology for Society, at the Japan Science and Technology Agency. He is a co-author of publications including "SF Prototyping: A New Strategy for Creating Innovation from Science Fiction," "AI Wolf: AI that Befools, Detects and Persuades," "Designing the Gap Between Humans and Robots," "Can Humans Coexist with AI?" and "Defining Trust: From Leviathan to AI." He is also the supervising editor of "SF Thinking: Skills to Think About Business and Your Future."

Professional Engineer, Japan (Information Engineering). After joining Hitachi, he took part in the research and development of platform systems at the Central Research Laboratory. He led customer co-creation projects in the finance sector and also directed research in AI and data science. He took up his current position in 2020. He was a visiting scholar in the Department of Computer Science at Stanford University from 2002 to 2003. He completed the Advanced Management Program at Harvard Business School in 2018. He is a member of the Association for Computing Machinery (ACM), the Information Processing Society of Japan and the Institute of Electronics, Information and Communication Engineers.

After joining Hitachi, Yukinobu Maruyama built his career as a product designer. He was involved in the foundation of Hitachi Human Interaction Laboratory in 2001 and launched the field of vision design research in 2010 before becoming laboratory manager of the Experience Design Lab's UK Office in 2016. After returning to Japan, he worked in robotics, AI, and digital city service design before being transferred to Hitachi Global Life Solutions, Inc. to promote a vision-driven product development strategy. He is also involved in developing design methodologies and human resource education plans. He took up his current position in 2020.