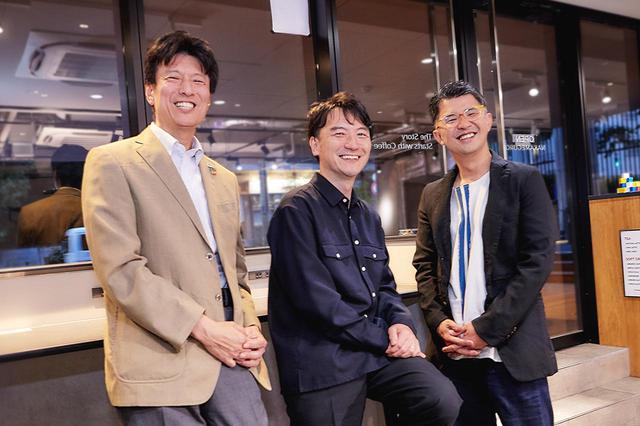 Innovation Starting with a Question - Vol.2 "Vision-Driven"
[Part 1] How can we create a vision? (First half)

Executive Foresight Online 編集部 @ Executive Foresight Online
From Kyōsō-no-MoriInnovation Starting with a Question - Vol.2ManagementDesign ThinkingExpert
In this series of articles, we think about "questions" through dialogues between members of Research & Development Group, Hitachi and experts such as researchers and designers. For the second webinar live streamed on July 9, 2021, we welcomed Mr. Kunitake Saso as our guest. Mr. Saso has been advocating for "Vision-Driven," a concept that seeks to create new businesses with visions as the starting point. In this first part, Mr. Saso explains the role of visions as they differ from "plans," and the methodology for creating them. This series consists of three parts.
FacebookTwitter

Maruyama
My name is Yukinobu Maruyama, Head of Design at Research & Development Group, Hitachi. I will be the host of this webinar. During our previous dialogue (link: Innovation Starting with a Question — Vol. 1), we brought you an interview focusing on the "purpose" of companies and Social Innovation Business from the perspective of Purpose Engineering. In today's dialogue, we would like to think about the question of how to create a "vision" — the "driving objective" of Social Innovation Businesses — and how to put it into action. Our guest is Mr. Kunitake Saso, CEO/Chief Strategic Designer of the co-creative strategic design firm, BIOTOPE.

Mr. Saso
Nice to meet you. I consider design thinking to be the "art of coming up with in your own unique way, a new solution for a certain problem and putting it into action." After studying this concept at graduate school in the US, I had the opportunity to put design thinking into action when I took part in the creation of new businesses and service concepts at companies such as Sony. Then, I became independent. I am currently engaged in helping companies create visions and design new intangible values generated by corporate management, such as systems for breaking down visions into a company's management philosophy and culture. In this way, I have always kept a close eye on Hitachi's "Vision Design (*)" initiative.

*In order to explore the ideal form of systems that support society and Hitachi's role within that, Hitachi's design initiatives provide a future vision as a basis for discussion.

Mori
My name is Masakatsu Mori of Research & Development Group, Hitachi, Ltd. I am the moderator of this webinar. Mr. Saso, thank you for being with us today. With regard to the concept of "Vision Design" that you just mentioned, Hitachi is involved in this in two ways. First, there is an in-house team called the Vision Design Project. The Vision Design Project is engaged in the realization of social innovations through activities such as sharing visions, supported by Hitachi's individual business unit, with society. The second way concerns myself, as the person in charge of the organization, the Global Center for Social Innovation (CSI). At CSI, the leaders of different organizations create visions and unite their employees. Today, I am looking forward to hearing your thoughts about these two different points.

The era of "visions," rather than "plans"

Maruyama
Let's start with the first question. "How can we create a mid to long-term corporate vision?" Mr. Saso, could you give us your answer, please?

Mr. Saso
Recently, there has been a shift in the business world in regards to the utilization of visions. For example, I often hear people talk about new projects where the initial vision was great, but as the project took shape, the vision became increasingly dull. The same situation can always happen, especially in larger companies, when a vision is incorporated into business practices. However, on the other hand, startups that continue to create new values do well at utilizing visions. To begin with, I think it is essential to understand the role of visions and how they generate new values.

Please take a look at this chart. Plans such as mid-term business plans and mid-term management plans that cover the next 3 to 5 years are what large companies create as they think about the future. From there, they look at current market conditions and predict how things will change over the next 3 to 5 years. Then, they create a profit model accordingly. This is how plans are generally devised.

In contrast, in recent years, more emphasis has been placed on long-term plans that span the next 10 or 20 years. However, though, it's obviously impossible to correctly predict changes in the market 10 years from now. An increasing number of companies are using the so-called "backcasting" method of planning by predicting changes they are relatively confident will occur first, then imagining the world that they aim to create. In order to realize this, they devise plans to proactively tackle the possible changes in the market.

In other words, what companies create with the future in mind has shifted from traditional "plans" to "visions." And companies that succeed in creating visions will be the ones to connect to people. The person who best represents this idea is Tesla's CEO, Elon Musk. By explaining each event that may occur in the ideal future and by adding a narrative, he makes the image of his ideal future more visible. In today's uncertain world, creating these "visions" has become exceedingly effective. Such are the changes in how we think about management over these several years.

Imagining a "vision" that emerges from within, before looking for an "issue"

Mr. Saso
In recent years, the approach of creating new businesses based on "issues" that need to be solved, as exemplified by the "Issue-Driven" concept, has been garnering attention. This is certainly important, but I have this idea that what you need is a "vision," rather than an "issue." In short, I think what's truly needed in management is the "Vision-Driven" approach.

There is such thing as the "1→∞" aspect, which further enhances the efficiency of existing businesses. This states that when the market is growing and can be predicted to some extent, it is rational to use "Strategic Thinking" to improve business by repeating the cycle of selection, concentration, and verification of resources toward strategically set goals, and "Improvement Thinking" to improve business efficiency by implementing the PDCA (Plan/Do/Check/Action) cycle.

Contrary to this, in the "0→1" aspect, which centers around creating something that doesn't currently exist, the market does not necessarily grow or even become visible. This is where "Design Thinking," which repeats the cycle of setting an implicit challenge the world faces as an issue, empathizing with it, inventing, and prototyping, is applied.

In addition, it is the "vision" that is the premise for all of this. In short, we need to give shape to a future that emerges from within ourselves, a future that we want to believe in. I advocate for "Vision Thinking" as a methodology for creating business through the cycle of dream, perceive, reclassify, and express. In this concept, you create new values by proposing the "future we long for" or the "things we want" that currently don't exist.

Graduate of the University of Tokyo Faculty of Law.
Master of Design Methods from the Illinois Institute of Technology Institute of Design.
Mr. Kunitake Saso worked at P&G, marketing hit products such as Febreze and Lenor, before becoming the brand manager of Gillette. He joined Human Value, Inc. and took part in the launch of Sony Corporation’s Sony Seed Acceleration Program, before becoming independent. He specializes in the brand design of B to C consumer goods, and in the concept design and service design of high-tech R&D projects. He is the author of various publications including “Lesson in Design Thinking Taught at the World’s Top Design Schools” (Nikkei BP Publishing, 2020), “Vision Driven” (Diamond Publishing, 2019), “Vision Driven Innovation” (Nikkei BP Publishing, 2019).